No MP should ever oppose plans for homes in a local plan without saying where else they should go.  Otherwise they are bucking government policy.  Worst of all they shouldn’t run sham fake consultations on their website  that don”t allow for answers in line with government policy.  The issue is not whether you support A plan for a 5,000 home community but where you think they should go.  If you can”t say where – well your never going to get promoted to housing minister are you.

The development is being considered for inclusion in Swale’s new Local Plan, which will set out where new homes should be built in the borough between 2022-2038.

The North Street development is one of four ‘garden villages’ being considered by Swale’s Local Plan Panel as a way of delivering new homes in our area.

I’m not against the idea of garden communities in general, but extra care needs to be taken when going ahead with such large developments because of the impact they have on the landscape and nearby communities.

The proposed development at North Street would be completely inappropriate for inclusion in the Local Plan. It’s hugely unpopular and would do enormous damage to an area of high landscape value as well as putting further pressure on local roads.

I’ve written to the Chair of the Local Plan Panel, Cllr Mike Baldock, to call for the North Street development to be rejected at the next opportunity. 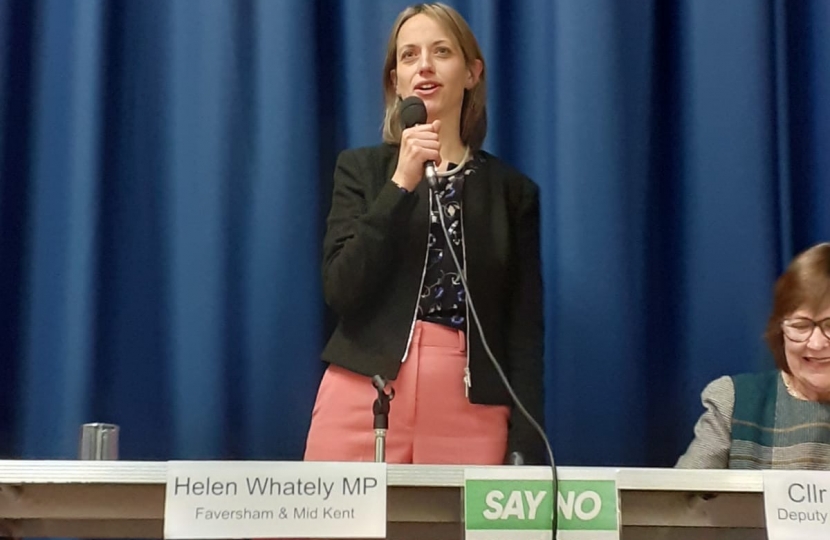 Lenham Heath and the surrounding area are under threat.

Maidstone Borough Council has revealed plans for a new ‘garden village’ around Lenham Heath which could see 5,000 – or more – new homes built in this area.

The development would destroy an area of farmland at the foot of the North Downs and put huge pressure on local roads and services.

I’m working closely with the parish council, the “Save Lenham Heath” campaign, and Borough and County councillors, to oppose this development.

Both of these proposals would be rail based, outside the Green Belt and would protect the North Downs AONB by developing outside of them, as well as being well located to existing settlements and railway stations.  It always shows a true blood Nimby will oppose good planning anywhere.

One thought on “@Helen_Whately England’s Most Nimby MP – Your Opposing Plans for 10,000 Homes, So Where Should they Go ?”