A lot of speculation in the press today that the review group will scrap it as the panel includes some critics.  I note however the critics on the panel have all questioned it on rational cost-benefit grounds and are not doctrinal opponents. Let looks at the terms of reference.

For the whole HS2 project, the review should rigorously examine and state its view on:

Three key points.  Firstly as everyone acknowledges the key benefit is capciaty and there is no plan b to increase intercity capacity.  Secondly the overuns have been on land aquisition primarily.  This is a sunk cost.  It is an application of the sunk cost fallacy to include these, the money cannot be recovered. 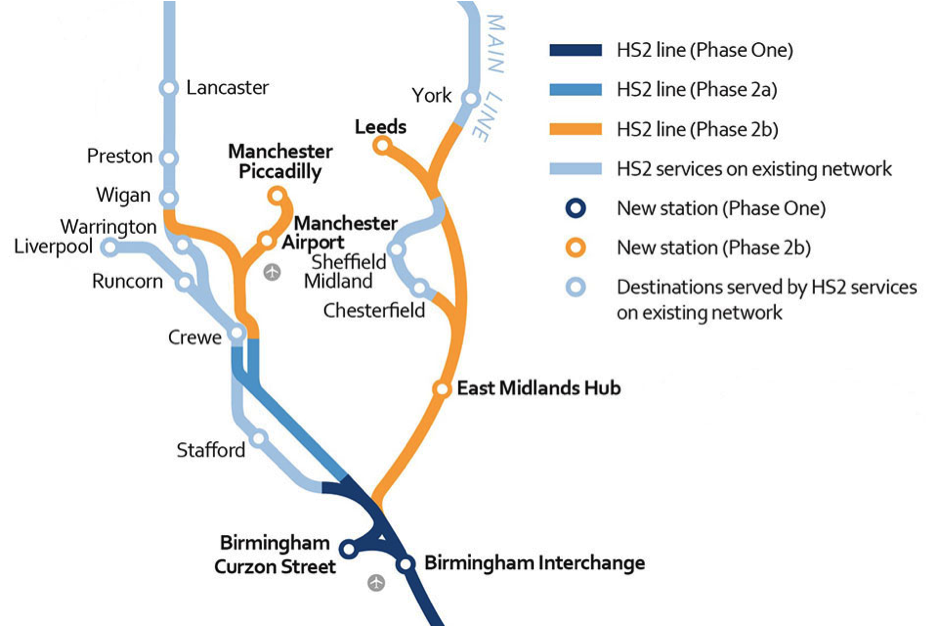 However the cost benefit ratio only significantly increases when you get to Manchester, and potentially Liverpool and HS2 with a chord can cut travel time between Liverpool and Manchester by half an hour.  We still dont yet have proper plans for Manchester Picadilly   So extending 2a North of Manchester Airport would be impractical until the  concept design of the NPR/HS2 interface at Piccadilly is finalised.   The previous chancellor had pledged to look at a direct HS2 connection requiring a new station in Liverpool.  However designs are at such an early stage that it would be impractical to include in 2a.

The review includes a number of measures oft touted in terms of improving CBA including termining at Old Oak in the short term, unlikely I think given sunk costs.  Although the speed and headway (18 trains per hour) have been criticised as costly the UK has gained much greater experience of ‘digital railway’/japenese style signalling, and several examples of this will be in operation by the mid 2020s.

Two sections of the paper struck me.

whether there are opportunities for additional commercial returns for the taxpayer through, for example, developments around stations, to offset costs

There are several examples of where this is planned, at Birmingham Interchange for example and Taton.  There are several more where it is possible at Old Oak (with a much more publicly led land acquisition strategy then planning including the Car Giant Site), at Calvert where it could interchange with East West Rail (providing there was additional terminal capacity in London) and at the proposed Garden Town at ROF Swynnerton where a maintenance depot and new junction to the M6 is proposed as well as reopening the rail link to Stoke.  Half way between Brum and Manchester the strategic case is much the same as Calvert.   All of these require additional accelleration/deceleration/passing lines (as proposed already at Birmingham Interchange and japenese style light trains (proposed anyway) – done together these could transform the business case, as like in Japan 25% of revenues could come from commuter traffic.

Another section struck me.

different choices or phasing of Phase 2b, taking account of the interfaces with Northern Powerhouse Rail

The description of 2a is misleading as North of Crewe and the link to Sheffield are both described as 2b.  However the eastern arm is projected to cost twice as much as the link to Manchester.  Large part of this is due to a costly and slow link to Sheffield City Centre when there are several cheaper options.  Also the choice of a Sheffield station needs to be taken at the same time as how it would interface with Northern Powerhouse Rail, for example a link through to Sheffield Victoria then eastwards to the Woodhead Tunnels, though the diasdvantage of this is the loss of a Braford alignment.  Leeds and Braford are so close though a fast metro style link makes much more sense than a HSR link as the headway impact on including a Bradford (or Rochdale) links are crippling of the business case.

if you want to rapidly massage the CBR than the easiest thing to do to delay phase 2b north of Taton for 5 years as well as North of Manchester Airport, compensating whilst announcing NPR/HS3 with links to Sheffield and Liverpool, though delayed by 2-3 years whilst the precise alignment and connection details are finalised.  This could save around 20 billion in current spending committments for the project.  At the same time announce land value capture programs at Old Oak Common, Birmingham International, Calvert, Taton and Swynnerton .  Each one of which could yield around 5 billion (3 billion after local infrastructure) adding 15 billion to the benefits pot.  #

Both of these together bring the project within the Treasury cost envelope.

Of course the New Zealand System is based on resource management which the draft statement says has not been focussed enough around spatial planning, or social and economic considerations.

Some planning decisions on urban development appear to consider only the effects on the natural environment or specific amenity considerations, and not how the urban environment meets the social, economic and cultural needs of people and communities. Many decisions
focus on the adverse effects of development, and do not adequately address its benefits (including for future generations). This can have a local and national impact…

The Government intends to introduce objectives and
policies in the NPS-UD that would:
• emphasise that amenity values can change over time, with changes in communities and their values, and through the opportunities urban
development offers
• shift the current perception that urban development only has negative effects on amenity for individuals, to also recognise that it can enhance amenity for other people and communities
• emphasise that local authorities should consider amenity values for current and future communities.

Current planning reflects a bias towards the status quo and away from change….

Part of the reason for the current constrained supply of housing and continuing unaffordability is the limited choice and variety of well-integrated, higher-density housing. A lack of higher density housing fuels higher prices across entire cities, not just where intensification might
be appropriate.
Often higher-density housing is not developed in a way that enhances the urban environment – in the right quantity, type or location that supports affordable living to meet the diverse needs of people and communities.

One cause is a political bias towards local propertied interests. Restrictions on intensification often reflect the interests of current property owners (who may not want change in their neighbourhood) over the needs of the wider community – for example renters, new home
buyers, social housing providers and future generations. These groups are prevented from living in homes close to the best job options, services and amenities. They are also less likely to live in areas easily accessible by public and active transport. Those most affected are people on
low, medium and even above average incomes, particularly young people, working families, Māori and Pacific people. As a result they spend more on transport to get to high-demand
locations

The document could be improved n a number of ways.  It could replace the term ‘urban development’ with ‘Urban Living’ as pioneered in Bristol to emphasise the positive qualities a well planned urban environment has on people and the planet.  Secondly it should make clear that urban living is essential in the transition to a zero carbon society.