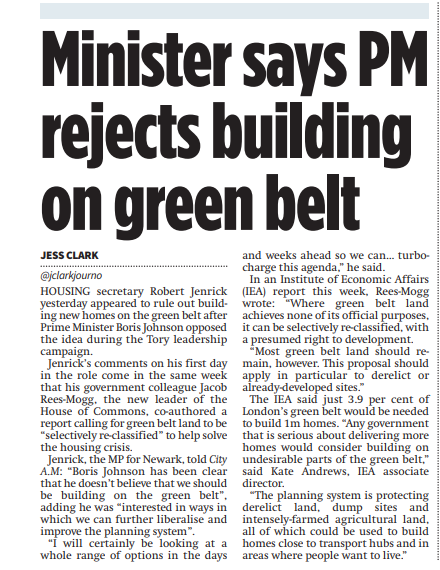 Greater Manchester’s 201,000-home spatial framework looks to have been kicked into the long grass again, although the GMCA’s attempts to pin the blame on the Government for the delay have been questioned by those close to the process.

The latest delay leaves it unlikely that any final form of the framework will come forward before next year’s Mayoral elections, taking place in May 2020.

The long-awaited draft of the framework was published in January this year, outlining Green Belt release and a plan to build a minimum of 201,000 new homes across Greater Manchester’s 10 boroughs, alongside 65m sq ft of employment space; a consultation on the plans followed soon after.

However, the Manchester Evening News reported this week the framework had been delayed again with sources close to Mayor Andy Burnham’s office blaming “an error in the draft legislation” and pointing the finger at Whitehall officials for the delay.

Despite this, it is understood much of the delay hinges on the GMCA’s decision to pursue the spatial framework as a Spatial Development Strategy, which under current legislation does not allow for Green Belt release.

The GMCA had been attempting to convince Whitehall officials to change legislation to allow the GMSF to be able to release Green Belt, despite it being an SDS, but this has been met with push back from Government.

Sources close to the process told Place North West: “The GMCA knew all along they would have this complication when they chose to pursue the GMSF as a spatial development strategy, but they still wanted to allocate [Green Belt] sites for release. The Government was always going to say no.

“Why they haven’t just taken it forward as a joint development plan [which does allow Green Belt release] is beyond me. If I were Andy Burnham, that’s exactly what I would do”.

Part of the reason, according to senior sources, is that the GMCA is “not confident its evidence base is strong enough” to push on with its housing plan; if pursued as a JDP, more evidence would have to be submitted to Government than under an SDS. Another source said: “From conversations we’ve had, it looks like the evidence base as it stands would face failure at examination”.

It also understood the Liverpool City Region, which is pursuing its own spatial development strategy, is against changing legislation to allow SDSs to include Green Belt release, with the Liverpool authority instead wanting to allow local authorities to choose where to release Green Belt under their own Local Plans. This puts it at odds with the GMCA’s view of SDSs.

Under the existing timescale for the GMSF, the next version would have come forward this September, before being signed off by all 10 boroughs in October. A consultation would have followed before Christmas, with the framework being sent to the Planning Inspector in spring 2020.

There remains, however, some opposition from local authorities. In Bolton, a change of administration leaves any potential backing of the GMSF in the balance, while sources close to Stockport Council suggest the GMSF would be “very unlikely to get through the chamber” based on the council’s current make-up: the only fully pro-GMSF party is Labour, which has eight seats; the Liberal Democrats and the Conservatives, which have argued against the framework, have 10 and two seats respectively.

It understood there is “no clear plan” as yet if the GMSF proceeds as planned but is voted down by one of the 10 boroughs. Under the joint development plan model, the GMSF would only need to be approved by the executive of each of the 10 councils.

With a new Government now in place, with Tatton MP Esther McVey now holding the housing brief instead of Kit Malthouse, the future of the GMSF still remains up in the air, and a further draft looks more likely to come forward next summer.

The first draft of the GMSF, published in 2016, set a target of 227,000 homes over the next 20 years, and included the release of 12,100 acres of Green Belt, which was massively unpopular with the public and was spread unevenly across the 10 boroughs. Burnham tapped into this wave of discontent when he campaigned to be Mayor in early 2017, and when he took post in May of that year he commissioned Salford Mayor Paul Dennett to oversee a rewrite.

Responding to the news of the delay, the Housing the Powerhouse group, made up developers including Peel, Himor, Harworth, Barratt Homes, Gladman, and Strategic Land Group, called on the Mayor to now align the GMSF with Greater Manchester’s emerging Local Industrial Strategy, as well as negotiating a new housing deal for the region.

The group’s spokesman Rob Loughenbury said: “Greater Manchester clearly now needs an ambitious spatial plan to match its ambitious industrial strategy. The prospect of another delay to the GMSF is frustrating, but it provides the opportunity to align the plan with everything else that Greater Manchester is doing and to negotiate a better housing deal with Government.

“Providing enough good homes, of the right kind and in the right places, is essential to improving productivity and attracting and retaining a skilled workforce in areas such as advanced manufacturing and healthcare. We remain supportive of seeing the best possible GMSF in place as soon as possible.”

The GMCA said there would be a further update “in the coming months” but declined to comment further.

No only a full development pln can do that, however the ‘general conformity’ rule applies, so what an SDS plan can do is designate the strategy for a Green Belt i.e. west of the AXYZ just like structure plans used to, often years ahead of the local plans,  this means a strategic plan (SDS or joint JSP which does not contain strategic allocations or which does not define them on a map base) would not allocate/deallocate GB however a local plan to be found lawful and would would need to be in general conformity, indeed the only issue for an inspector would be the precise extent not the principal.  I cant understand why this cant be done here.  On the specific point of Liverpool’s kicking the can down the road soft strategic plan approach I doubt it would be lawful or sound a s a strategic policy is nothing if it refers to nowhere in particular, it has least to refer to broad locations.

Does a JSP require more evidence?

There is no equivalent of reg 18/19 consultation of an SDS rather all evidence is bundled up at examination.  I think this is a red herring as the SEA directive requires early engagement on realistic options which itself requires proportionate evidence.  The real difference is that between evidence need for strategic policies (which can equally be in a JSP) and site specific designations.   The new NPPF has quite strict requirements for evidence of Green Belt deletions – i.e. urban intensification and mitigation sites – and does not differentiate between the difference in proportionality of evidence needed for a strategic plan and a map base specific one.  This could easily and sensibly be done in guidance as a compromise between national and city governance to get the plan moving forward.

Does an SDS have different approval mechanisms?

Yes it is approved by board of combined authority i.e. leaders, a development plan needs full council approval.  Given the several balenced councils I cant see a JSP getting through unless it vetoed GB release authority by authority despite the evidence which wouldnt get through an examination. A simple change the new SoS could make is to remove the archaic liberum veto rule which I have long advocated. Would be very useful in Oxfordshire for example.