A defining feature of medieval settlements, especially villages, is building built directly to the street frontage, along narrow burgage plots.  There seems to be no correlation with geology or building materials, between planted (planned) settlements or organic ones.

The only (deceptive) difference with planted settlements is the widening of the street to form a market place or green – buildings were still built to the street frontage.  The only exception appears to be planned estate villages from the 18C onwards where a 1 foot gaps between the road and house were often planned to aid drainage (e.g. Boughton Northamptonshire).

This is at contrast with the picture postcard image of English village houses with picket fences and front gardens, however in villages where these are common, such as Suffolk, you typically find the medieval core, apart from the most upper status houses, were built to the street edge and only later houses from the 18th century onwards towards the outer edges of villages began to ape the nobility by creating front gardens on wider frontage (2 pole/perch width houses)

There are a number of potential explanations for this.  Continuous frontages with walls or hedges between gaps of houses allowed for easier martialling of livestock.   I think economic reasons may have been paramount.  There is evidence in English and Scottish town of ‘booths’ being created at the front of houses so they weren’t build to the street frontage.  The reason being to create space for workshops and market stalls.  Most later being infilled by shop-frontages and building refacing in Georgian times.  In villages the economic advantage on a building plot was to maximise the space used for cultivation.  A front garden used for flowers was a luxury, and splitting a narrow burgage plot between front and back gardens was inefficient.  A final speculative reason may have been drainage.  Houses would drain onto front and back, making the areas around houses at risk of waterlooging.  Facing onto more compacted ground on a sloping street was slightly more efficient in terms of drainage.  The large throw of thatched roofs showed the concern to avoid draining onto house foundations (typically none) whatever building materials were used, but especially where loose stone, wattel and daub or mud/cob was used in construction.   In many villages with thatch you can see macadamizing only went up to the edge of the throw to allow a drainage strip in front of the house (as in Selbourne below) but it would be  mistake to call this a designed front garden, before this it would have been a rough road to the edges of the house with grass growing long the edges simple because cart tracks would not reach. 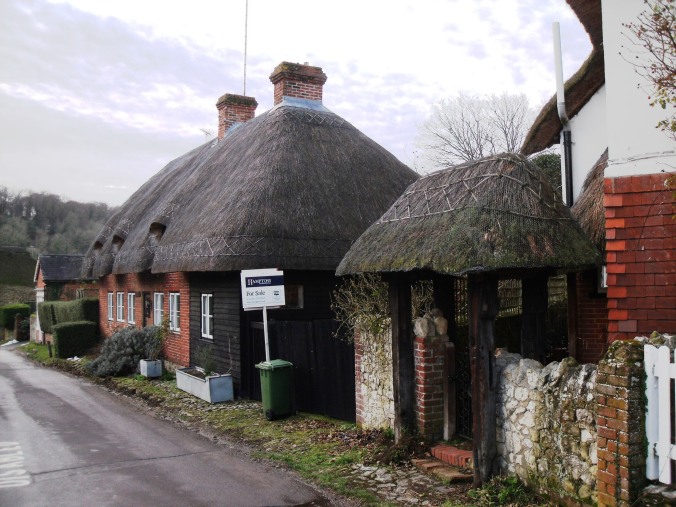