The standard method for Wokingham (804 per year) is no higher than the SHAM figure with a 2014 HH base.  So what are Wokingham playing at.  The consultation doesnt  even mention the ONS and MHCLG statements of household formation.

The consultation will not add to the evidence base one jot.

Do you support the government imposed housing numbers?

Everyone should answer yes are they are way to low as of course not including the employment plus element from in migration nor the overspill from London.

Ask a leading question get a statiostically meaningless answer.

A COUNCIL’S plan to allow the building of 1,200 homes on the site of a barracks is justified, it has been told.

Vale of White Horse District Council submitted the proposal for the homes at Dalton Barracks in part 2 of its Local Plan last year.

But its new leader said there now needs to be time for the authority to ‘consider its options’.

The allocation at the barracks in Shippon would be to take some of Oxford’s unmet housing need from 2029. Other Oxfordshire authorities have pledged to do the same – but there is doubt amongst critics that need exists.

Emily Smith, the Liberal Democrats’ leader on Vale council, said a planning inspector’s verdict that housing can be justified makes it more difficult to stop them in the future.

Mrs Smith was elected as leader in May, after the Lib Dems won a huge majority on Vale council.

She said: “We were elected on a platform that opposed a number of the proposals in this plan. Frustratingly, the inspector’s letter makes it harder for us to deliver what the public elected us to try to do.

“We need to take some time to consider our options in relation to Local Plan Part 2 and work out how to ensure the council is in the best position to achieve our aims and get the best deal for Vale residents.”

Part of proposals, by Colchester, Tendring, Braintree and Essex councils, to build 43,000 homes over the next 40 or 50 years, the system is designed to reduce congestion and provide quick and easy access in and out of Braintree and Colchester from the new towns.

The system, which could cost between £230m and £325m, will start off as a bus service with segregated lanes and priority over other traffic to increase its reliability.

Travellers from across the network will be able to use the system to access town centres and the councils have promised prices will be affordable.

Over time the authorities say the network will develop into an east to west public transport corridor running across north Essex.

The dedicated lanes could eventually be adapted to the reflect the latest ways of transport like trackless trams. 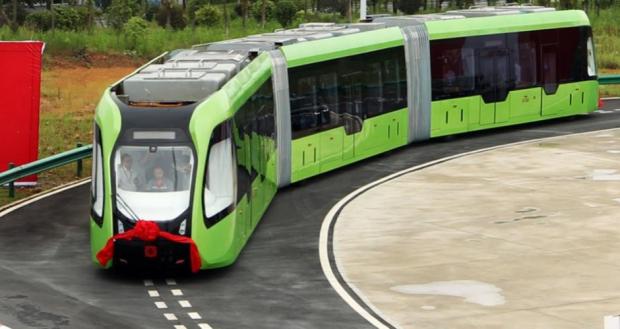 An example of a trackless tram

As well as linking the garden communities at the Tendring Colchester border, West Tey and west of Braintree, the system could also travel to Stansted.

“It would be a failure if e simply add thousands of new cars to our already stretched roads,” he said.

“This is why the rapid transit system is so important and why we are setting out a strong case for how it could operate from the first few homes. As we are starting from scratch we have the opportunity to design the new communities in such a way it supports a rapid transit link and encourage people to use it, as well as boosting, walking and cycling, instead of their cars.”

“Transport systems are evolving incredible quickly, and gone are the days where uncomfortable, noisy diesel fuelled buses are the solution.

“While the early stages of the Rapid Transit may be bus-based, we should be clear now that we will have ambitious, new modes of transport when the system is fully operational.”

Two things about this letter, firstly it seeks to give the SOS sufficient information to ensure that last minute MPS sought post inquiry interventions are unnecessary.  Secondly it seems to seek to avoid the kind of debacle we saw in East Cambridgeshire by setting up a warning system where carefully wond growth deals etc.  are put under threat by two footed  interventions by inspectors.

I recognise the important role that the Planning Inspectorate plays in examining local plans on my behalf and I am committed to ensuring the independence of the examination process. If local people and their representatives are to see the plan as an important platform for shaping their surroundings then they must have confidence that examination of the plan is fair and open and that decisions are made impartially. They are also right to expect that examination will be efficient, timely and easy to engage with. I do not generally have a role in the examination of local plans. However, this letter – which I am publicising on gov.uk – reminds inspectors and local authorities that Parliament has given me a number of legal powers that, where justified, allow me to become involved in plan making. This includes powers to notify or direct the Inspectorate to take certain steps in relation to the examination of the plan1 or to intervene to direct modification of the plan or that it is submitted to me for approval2. I am frequently asked by those affected by the planmaking process to consider use of these powers and must look at each of these requests on a case by case basis. This includes requests from Members of Parliament, who have a legitimate interest in the progress of local plans in their areas and are accountable to their electorates. I am pleased that the Planning Inspectorate’s published Procedural Practice encourages MPs to participate in the examination hearing sessions even if they did not make a representation and I would encourage their involvement in this way.

I am grateful for the work that the Planning Inspectorate does in providing factual
information to my officials on the progress of examinations that allows them to advise me on whether use of my powers would be appropriate. However, I think more can be done to make the provision of this factual information more routine and transparent.

For this reason, I am writing formally to set out two changes to our arrangements for sharing information that will be in place from immediate effect.
These changes are:
1. On a quarterly basis the Planning Inspectorate will publish a report that sets out the plans that are expected to be submitted for examination in the following 6-month period. I ask that this report be published on the Planning Inspectorate website. Clearly this can only be as good as the information
received from local authorities, and I am arranging for this to be drawn to the attention of local authorities to remind them of the importance of giving clear timetables;
2. The Planning Inspectorate will share all post-hearing advice letters, letterscontaining interim findings, and any other letters which raise soundness or
significant legal compliance issues, as well as fact check3 reports, with my
department on a for information basis, at least 48 hours in advance of them
being sent to the Local Planning Authority.
These arrangements are in addition to asking you to continue to respond positively to routine requests for information that arise on a case by case basis. I ask that you update the Planning Inspectorate procedural guidance to be clear that these arrangements are in place. I will ask the Chief Planner to write to Local Planning Authorities to draw their attention to this matter.
Finally, on the substance of plan examinations, I wanted to stress to inspectors – who are doing a challenging job – the importance of being pragmatic in getting plans in place that, in line with paragraph 35 of the NPPF, represent a sound plan for the authority and consistent in how they deal with different authorities. We support and expect Inspectors to work with LPAs to achieve a sound plan, including by recommending constructive main modifications
in line with national policy. In this regard, I would reiterate the views set out by the Rt Hon Greg Clark MP in his 2015 letter, which I attach, on the need to work pragmatically with councils towards achieving a sound plan.