Sir Roger Scruton was fired as a Government adviser today over a series of ‘white supremacist’ remarks in a magazine interview.

The academic, who advised the Government on housing policy, told theNew Statesman that Islamophobia was ‘a propaganda word invented by the Muslim Brotherhood in order to stop discussion of a major issue’.

In an attack on the government in Beijing, he claimed ‘each Chinese person is a kind of replica of the next one and that is a very frightening thing’.

And of claims Jewish billionaire George Soros wields too much influence over Europe he said: ‘Anybody who doesn’t think that there’s a Soros empire in Hungary has not observed the facts.’

Sir Roger also rejected claims of mounting extremism in Hungary as he said ‘the Hungarians were extremely alarmed by the sudden invasion of huge tribes of Muslims from the Middle East’.

The Prime Minister faced immediate calls to fire him as a government official today.

‘It is right that he has been dismissed.’

Sir Roger’s job survived a previous round of condemnation over allegedly anti-Semitic, Islamophobic and homophobic remarks.

Former Chancellor George Osborne said: ‘Yesterday, leading Conservatives rightly ask what they can do to reconnect to modern Britain.

‘Today, these bigoted remarks from the man they bizarrely appointed to advise them on housing.

‘How can Downing Street possibly keep Roger Scruton as a government adviser?’

The Prime Minister (pictured today at PMQs) faced immediate calls to fire him as a government official today. 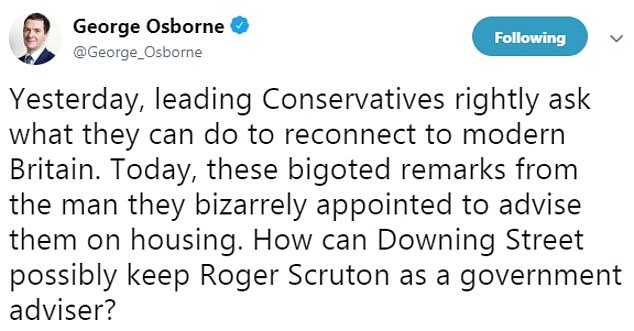 Labour’s Shadow Women and Equalities Secretary Dawn Butler said: ‘These comments by Roger Scruton are despicable and invoke the language of white supremacists.

‘His claim that Islamophobia does not exist, a few weeks after the devastating attack in Christchurch, is extremely dangerous, and his defence of the prejudice stoked by Viktor Orban’s government in Hungary is appalling.

‘He should never have been appointed but the Government should have sacked him when his horrific comments about rape, homosexuality, Islamophobia and antisemitism came to light, and when his association with far-right, neo-fascist organisations was exposed.

‘Instead, they defended him, with the Secretary of State for Housing, Communities and Local Government praising him as ‘a very brave defender of free speech’.

‘Theresa May must sack Roger Scruton immediately. If she doesn’t, it will be further evidence that she is turning a blind eye to the deep-rooted prejudices and racist views in the Conservative Party, and will again signal that her government endorses these disgusting views.’

A No 10 spokesman said he had not seen the remarks but added: ‘He is an adviser on housing.

‘It does not sound like in these comments he was speaking for the Government.’

One thought on “Scruton Finally Fired from Better Buildings Commission”