Basildon District Council in Essex was one of 15 warned by former housing secretary Sajid Javid last November  that he would “write their plan for them”.

In March, Javid warned Basildon’s then Labour leader Gavin Callaghan that if there were “any further significant delays in meeting your timetable”, he would “not hesitate to consider how to use the full range of powers parliament has given me to ensure that a plan is in place”. Basildon was not one of the three that Javid decided to subject to further central government scrutiny.

However, an extraordinary council meeting held last night saw councillors vote 22 to 15 in favour of a motion to reconsider aspects of the plan in relation to housing and traveller sites.

The motion was carried by the council’s Conservative majority, which took control of the authority in the May 2018 elections.

The plan though controversial would have been the same if the conservatives had been in power as the strategy for distribution of housing numbers was drawn up by the Tory admin before that.

It is without any doubt that the policy of threatening intervention has worked.  LPAs like St Albans, Castlepoint and York are coming round,  SW Herts and South Essex are finally producing joint strategic plans, though ones like South Oxfordshire and Northumbria  have taken a step backwards..  If Rabb doesn’t intervene now noone will ever believe the SoS will ever intervene again around the time of election – so it will encourage oppositionism and cut off your nose to spite your face partisanship across the country.  Castlepoint, St Albans  etc. could decide again teh balence of risk is to be part of teh awkward squad if we have again a SoS who is instinctively a Pickles like NIMBY. Rabb would become a lame duck. 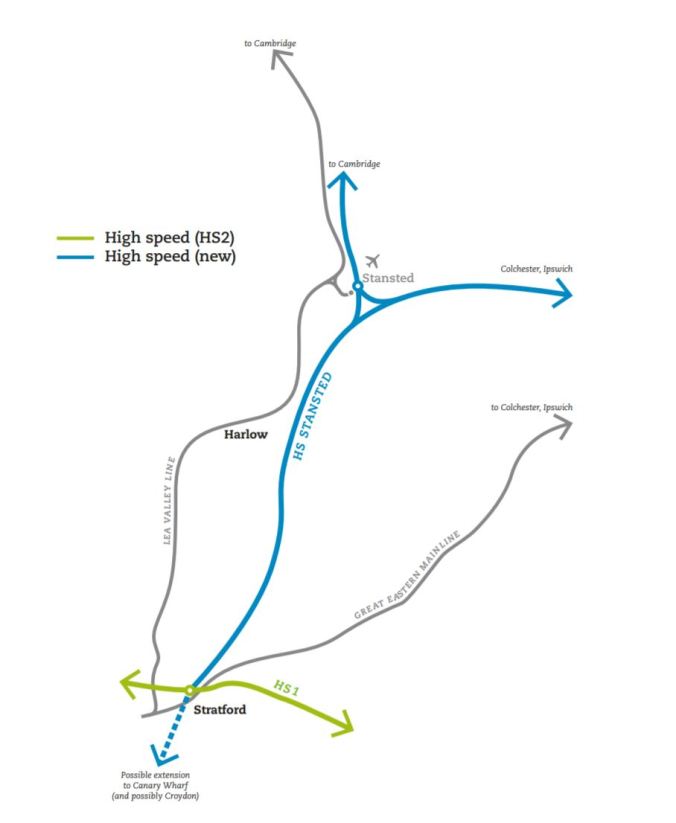 In a little noticed report respected rail consultancy Greengage21 has set out a 20 year vision for Britain rail network.  Its full of good ideas and  It includes a proposal for what would be effectively HS4 to Cambridge and Stansted.

Stansted has recently put in a planning application to raise its passenger numbers, something it can do by not increasing flights or increasing its noise footprint.  With the two main objections removed the only planning issue is therefore surface access.

The London Stansted Cambridge Corridor has got much less national attention sonce teh focus on Cam-KM-Ox but is just as important.

London Stansted Airport has the capacity to expand and could be a big part of the solution to the aviation needs of the Corridor, London and the Greater South East.
The London Stansted Cambridge Consortium should:
Produce a joint public-private economic development strategy for London Stansted Airport and its surrounding area, with the aim of developing the Airport zone as a growth node in the Corridor.
The strategy would articulate how international connectivity can support the vision to be a competitive global tech and life sciences region, and how the Airport can contribute to the aviation needs of London, the Corridor and the Greater South East

We are NOT talking about an additional runway here.  With runway 3 at Heathrow and an expanded Stansted we would have capacity to at least 2040-50 and it is premature to think beyond that in terms of emerging technology for surface access.

How does that link in with proposals for strategic growth.  Sadly little at the moment.

A proposal for expansion around Elsenham near Stansted was rejected at the first Uttlesford PLI, it had no real connection to the strategic road network.  There are also capacity problems with the WAGN line.

There are no less than two proposals for Garden Communities to the East of Stansted, one at Eaton Park has long been proposed y land securities, on land just outside the noise envelope and land area that would be needed for any second runway.  The second is West of Braintree, on the Braintree/Utllesford Border.

Neither of these would have rail access.  You also have to ask does it make any sense to propose two similarly sized garden communities within 5 miles of each other, duplicating facilities such as schools and town centres.  This could be fixed though be treating Easton Park, West of Braintree and Great Dunmow as one urban system linked to Stansted and Bishops Stortford by a bus rapid transit system.

There is a better way, and the Greengauge21 report shows the way.

HS4 as I see it here stage one could serve Stansted.  Phase 2 in two branches, one to Cambridge , an Alconbury/Huntingdon parkway station and Peterborough , the second eastwards of Stansted.   For the Cambridge branch a route through the city would seem impractical given the number of tracks so I suggest a station South East of the city near Shepreth also serving the good candidate for a New Large Garden City at Bassingbourn/Royston.  This would by the likely point East-West rail would meet exising tracks into Cambridge.  The out of city location here would not be a great problem as East-West rail is looking seriously at modern signalling systems that could give a 10 minute headway.

The Eastern branch would have a station serving one large community to the West of Colchester, and a chord to Stansted airport. Then it could have a station just to the North of Ipswich before heading to Norwich.  The East of England by my calculation needs to take around 17% of the overspill from London, if areas without environmental constraints within 100 skm of London took growth evenly (50% on this basis needs to go to the Cam-MK-Oxford corridor), around 102,000 to 2052.  The North Essex Garden Communities etc. only tale local existing growth so a growth corridor to Norwich – also involving dualling the A140 to deal with residual traffic, would be a good candidate, with a large Garden City – which I term Fosse (after the Fosse Way)  –  of around 80,000 population somewhere between Stowmarket and Diss.  I would make this a linear city with the old alignment used as relief tracks alongside the HS tracks so that perhaps 4 extra stations between Diss and Stowmarket restoring rail service to 3-5 villages along the old Great Eastern Line such as Millis, Finningham and Haughly (to enable feeder services from Bury St Edmunds).  These four-6 nodes of 7-10,000 population each would mean every house would be with 5-10 minutes of schools, shops and regular rapid transit The terminus for HS4 would be the former site of Norwich Victoria station, next to the modern bus station, now uselessly occupied by a Siansburys and a brutalist insurance office which is 90% car park.

This station pattern, of around 1 station every 30-40km would be perfect for high speed rail with acceleration/deceleration tracks and is just the station patterning used in Japan.

The HS arm to Cambridge would free up capacity on WAGN, enabling greater expansion around Great Chesterford and Elsenham, which I would like to Stansted via a new link road would would also relieve Stansted Montficit village.