The village of Milton Malsor just south of Northampton has a unique locational advantage, as it is here that the M1, the A43, the A45, the WCMl and the WCML Northampton branch all cross.

It is no surprise that the area is being eyed up for an SRFI, however two are proposed, one to the east and the other to the South of the village.    The Northampton Gateway proposal now submitted, Rail Central very soon.  It is obvious that the two are incompatible, and that the best site would take in some land for both with both access to the A43 and the A45 to spread traffic and reduce impact on the village.  the CPO powers that go with a DCO makes that possible.

Instead we are in another DCO ‘race’ as under the legislation there is no provision to examine both together and determine one and not the other.  So what the final decision is before parliament and they are sovereign.  If inspector at a joint hearing want to make that recommendation they’re perfectly free to.

The NIC report contained a recommendation that the ‘central’ part of the Cam-MK-Corridor come up with joint strategic planning arrangements  or the government should impose them.  Its been nearly six months and so far nothing.  Admittedly Northamptonshire has been convulsed by the bankruptcy of the County Council and the agreement to go with two unitaries.

In terms of planning however we already have two joint committees and plans, though the West Northamptonshire plan never had the ownership of the district so it refused the first urban extension on allocated land that came forward post adoption.  East Northamptonshire doesn’t even seem to be in the corridor curiously.

The title of the NIC report now includes Northampton but it hardly gets a mention in the whole report.  This is clearly the main missing link from the report.  Northamptonshire in not getting its act together has no ‘big asks’ in terms of infrastructure.  Not even the restoration of a WCML station and service at Roade, which will be possible with increased capacity on the four tracks here with East West Rail and HS2.   Now Northampton Castle has been upgraded this cannot be seen as a diversion.

The root of the problem here is that politically Northampton thinks t had ‘seen off’ the 35,000+ expansion of the town from the South East Plan.  However as we know from Milton Keynes and elsewhere all of the South East Plan proposals have come back with a vengence.  The case for expansion of Northapton, its underperformance economically, its strategc location in the centre of England and ability to take London overspill and ease overheating elsewhere in the corridor are more pertinent now than ever.

The South East plan forsaw expansion to the South East of the Town, effectively a mirror of the New Town era expansion.  Growth here a around Roade are the logical ares for expansion., and at Long Buckby if it had its station restored and the Northampton arm. as it it so close to employment growth at DiRFT.

The intriguging possibility here is to use the former Northampton-Bedford trackbed as a BRT line (Easier in teh short run than rail restoration) which woul also enable north Western expansion of Bedford (badly needed given the demiseof their Garden Village).  If you doubt the need for this try travelling from Bedford to Northampton by bus.

If this fells far fetched just ask yourself who first proposed locations for 5 major Garden Cities in the corridor – Iv’e got to publish that report soon. 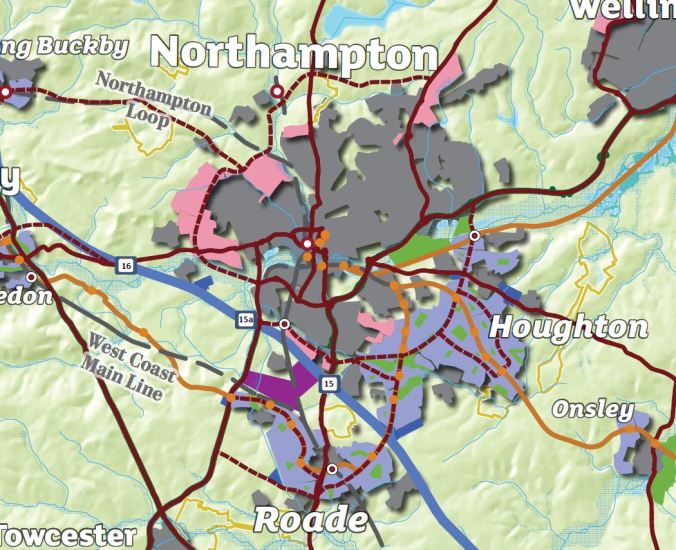 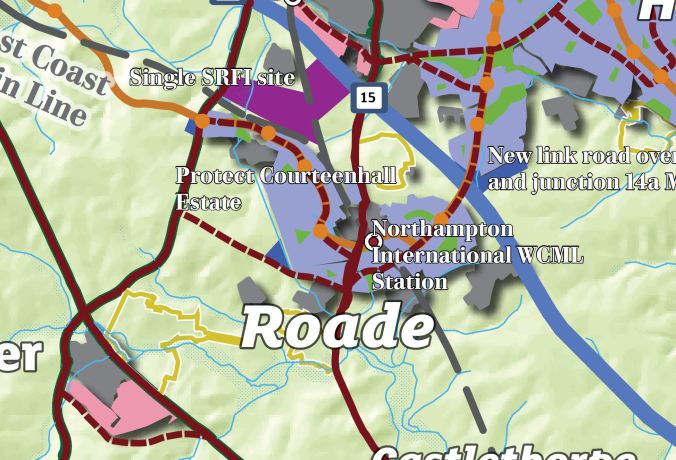 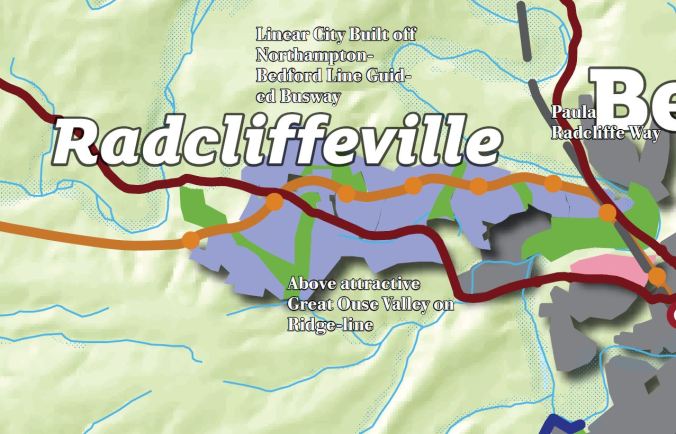 After 24 minutes in Conhome