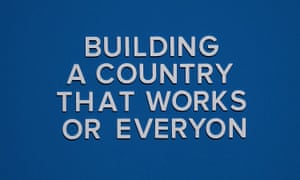 Her Conference Speech housing section below

The boom in the housing market means that while some have done very well, for many the chance of getting onto the housing ladder has become a distant dream.

And it’s that fact, perhaps more than any other, that means for too many the British dream is increasingly out of reach.

It has always been a great sadness for me and Philip that we were never blessed with children. It seems some things in life are just never meant to be.

But I believe in the dream that life should be better for the next generation as much as any mother. Any father. Any grandparent.”

“The only difference is that I have the privileged position of being able to do more than most to bring that dream to life.

So I will dedicate my premiership to fixing this problem – to restoring hope. To renewing the British dream for a new generation of people.

And that means fixing our broken housing market.

For 30 or 40 years we simply haven’t built enough homes. As a result, prices have risen so much that the average home now costs almost eight times average earnings. And that’s been a disaster for young people in particular.

We have begun to put this right. The number of new homes being delivered each year has increased significantly since 2010.

Our Housing White Paper set out plans to increase it further, ensuring councils release more land for housing, and giving them new powers to ensure that developers actually build homes once they’re given planning permission to do so.

And because it will take time for greater housebuilding to translate into more affordable house prices, we have introduced schemes like Help to Buy to support people who are struggling right now.

But the election result showed us that this is not nearly enough.

So this week, the chancellor announced that we will help over 130,000 more families with the deposit they need to buy their own home by investing a further £10bn in Help to Buy.

We have announced measures to give the increasing number of families who rent from a private landlord more security – and effective redress if their landlord is not maintaining their property.”

We will encourage councils as well as housing associations to bid for this money and provide certainty over future rent levels.

And in those parts of the country where the need is greatest, allow homes to be built for social rent, well below market level.

Getting government back into the business of building houses.

A new generation of council houses to help fix our broken housing market.

So whether you’re trying to buy your own home, renting privately and looking for more security, or have been waiting for years on a council list, help is on the way.

It won’t be quick or easy, but as prime minister I am going to make it my mission to solve this problem.

I will take personal charge of the government’s response, and make the British dream a reality by reigniting homeownership in Britain once again.

And let me say one more thing. I want to send the clearest possible message to our house builders. We, the government, will make sure the land is available. We’ll make sure our young people have the skills you need. In return, you must do your duty to Britain and build the homes our country needs.