What do Theresa May and Le Corbusier have in common. Sadly the same discredited Modernist philosophy on urban planning and how to solve the housing crisis.

Let me explain.  In 1933 CIAM held its famous ‘Functional City’ conference in Athens.  Le Corbusier was its keynote.

The urbanist, he stated, must choose between two tendencies, to extend or to contract the city. If the latter was chosen, concrete and steel must be used to preserve the “essential joys” of the sky, trees and light.

Theresa May in her interventions on the Housing White Paper has forced exactly that false choice.  Of course if you reject expansion you have to go high rise very high rise.

The early years of CIAM were dominated by a wing under Ernst May chief architect of Frankfurt.  Its progressive Mayor wanted lots of cheap housing – no more than 25% of income.  May and his incredibly talented team drew up plans for 25,000 houses in 1925, built between then and 1933, 2,000 in the first year alone.  Authors of the housing white paper take note.

May, who had studies under Raymond Unwin, realized that to build this many given tight Weimer budgets he had to slash costs, and that included:

The schemes built under the ‘New Frankfurt’ programme became world renowned, though the walls and insulation are thin by modern standards they are well liked and now preserved as a World heritage site. 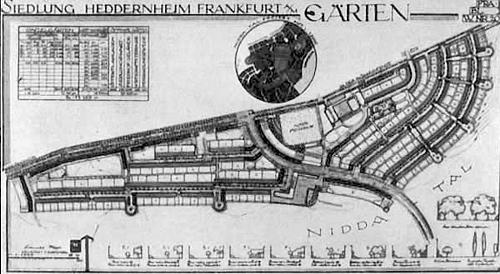 Walter Gropius argued in 1927 that the Frankfurt economic considerations should be paramount.  High rise blocks would forge a new kind of industrial man.  He also wanted to abolish the street.  He wanted an evolution away from the perimeter block to the slab blocks, longer (requiring deck access) and taller.

The focus on sunlight meant the taller blocks had to be set further apart.  The green space was incidental – it was not to be used but to be looked at from flats and provided access to the sky.

By 1930 May his work done in Frankfurt took his entire team to Russia to design 22 cities, though forced to use neoclassical not modernist designs, before Stalin threw foreign contractors out in 1934.  May left to work in British East Africa.

This left the field at CIAM open to those who wanted to build tall redeveloping existing areas.   Its chair Cornelius van Easteren  argued that “block form of street walls and lot lines, were unnecessary.”   With dogmas gelling around the Charter of Athens, the alternative progressive cities planning of New Frankfurt and Red Vienna were forgotten.

Theresa May seems very much like a figure from the 1930s, and very much like Corbusier; the same prioritising of the social and national will over individual liberty.  The same dogmatic belief in building up not out because it satisfies emotional beliefs not fact or evidence. The same false polarisation between building up or out.  She will leave a similar blight on our cities.