The London Society has just released a report authored by Johnathan Manns of Colliers of Dr Nicholas Falk of Urbed, with an advisory board that includes intriguingly Paul Miner of the CPRE.  One wonders if this is a bit like Ken Shuttleworths ‘Panel of experts’ who dont get to see reports before they are published.

The first 28 pages comprises general features for good planning including land value capture and transport orientated development.  There is little to disagree with here but it does not make for a well structured report as the application of these principles should grow from the site and its potential and limitations.  Very little in planning is apriori. Indeed its a sign of student projects when the first half of a submission is padded out thus without analysing the site.

The report focuses on a wedge of land to the West of Heathrow as an extension of the GLAs ‘City in the West’ hitherto wholly within the Green Belt.  It is an area which deserves examination as close to Heathrow it is the area which will feel the greatest urbanisation impacts of a third runway (estimated at around 70,800 homes).  And nearby Yalding/Gerrards Cross was briefly mentioned by civil servants before the announcement.  We have looked at the potential of parts of this area on the blog before.

I am a defender of Green Belts, to serve their original function, to shape urban form, stop urban sprawl and to afford countryside recreation.  However with programmes to offset displaced housing need they have become purely restrictive devices.  With Housing falling short by 250,000 over the next 20 years (even without Heathrow) there is no way by any estimate this can be built within London without redeveloping a couples of boroughs worth of existing housing.  Noone is suggesting this, though undoubtedly more can be done.

The report contains some good ideas like redeveloping RAF Northolt – an ideal brownfield site if ever made surplus.  On other areas it is rather scant treating the area generically – suggesting 100,000 homes sitting on 1/3 of a publicly accessibly Green Web of around 37sq km.  The diagrams for this are rather sketchy, which could be counterproductive in raising alarm.  To my mind the development is too dispersed and should be concentrated more around key corridors and nodes.  Only Langley and Iver within the Green Belt are specifically mentioned.

I many ways this broad area is not ideal as it is the meeting point of the M25 and the M4, and so large amounts of new housing could simply jam roads, also the Colne Valley is very low lying and prone to flooding.  Indeed this rules out large scale (as opposed to medium scale) development around Langley station.

I would approach this issue a different way asking

2.  Can we maximise the opportunities from improved surface access to Heathrow.

A hub station on the WCML was proposed east of Iver station with a ‘people mover’ to new terminals/  The Airports commission report rejected this as inferior to a new rail connection to Slough and Reading.  The two are not incompatible, there would be a regional metro type scheme from Reading to Heathrow with interchange station at Iver and bRT connections to this station.

Iver station doesn’t suffer from flooding and there is an area not contributing to the Green Belt surrounded by brownfield sites.  This is a potential city centre area for a new Garden City.   But you want to develop away from the motorways because of noise and avoid the merger of Langley and Iver.  So 10,000 or so is a more realistic estimate of potential here even at high density.

There are other areas with could be developed as nodes and linear corridors to ths hub, mainly to the north. Crucially the Iver North water treatment works could be expanded to cope and feed into the river Colne, always the first question you should ask in setting down a site for a new settlement.  A huge national grid substation could be expanded at Uxbridge Moor. 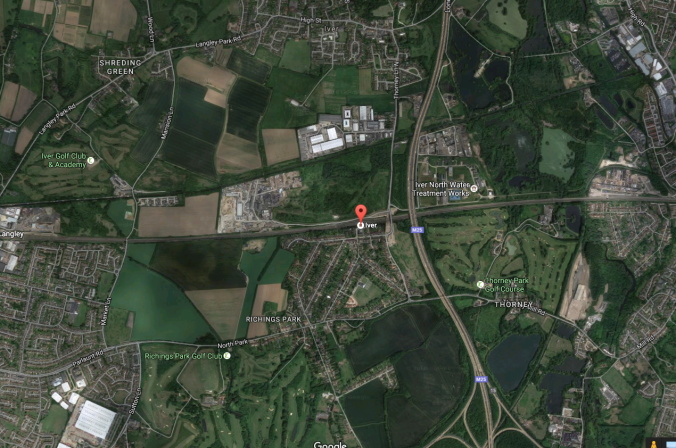 To the North there are areas of Ribbon Development to the South of Iver Heath which could be filled out with medium density housing along a transit corridor to Iver, around 3,000 house potential.

This links to Pinewood where you could build 1,000 homes on a brownfield site.  Though previously losing an appeal proposed changes to national policy would make it appropriate development.

South of Denham Station you could fit around 5,000 houses at medium density, and 2,000 west of Gerrards Cross at Low Density.

To the North of Denham Station at the Golf Course and old Aerodrom is space for around 10,000 homes at high density.  This is also the HS2 route and with the right HSR techncologyb there could be a commuter station here, like many on the edge of Tokyo.

A wedge of land north of Denham and South of Maples Cross could take around 7,000 houses at Medium density. At Chorelywood Bottom their is land surrounded by motorway and urbanization which could take around 5,000 homes. And another 5,000 with a western expansion of Chorelywood to the woods itself and again to its north.

Between George Green and Shredding Green their is a potential for a new Township to Slough which could take around 7,000 houses.

A final township area could be around Horn Hill and South of Newlands Park, around 5,000 houses.

With the loss of a few Golf Courses that get us between 60-70,000 houses, together with Northolt sufficient to meet the urbanisation needs of Heathrow

With a BRT connection to Heathrow in less than 20 minutes you could develop the housing essentially car free and with permitted parking on all roads.

None of the above requires development in the Colne Valley Regional Park or Chilterns AONB.  The BRT could also connect through to Uxbridge and Ruislip for the underground system.

So with a more focussed approach, around opportunities and constraints, this area has real potential and could solve a real issue around Heathrow urbanisation.