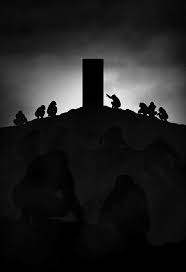 Really sometimes you could not make it up

Ed Miliband suffered his “Neil Kinnock moment” on Sunday, opponents said, after pledging to install an eight-foot limestone monument [A better plan a better future] to his manifesto in the Downing Street garden.

Labour descended into infighting over who was responsible for the eight-foot-six limestone monolith engraved with six election pledges.

Mr Miliband unveiled the edifice in Hastings on Saturday to show his vows would be “carved in stone”.

…critics dubbed it a “policy cenotaph” and “the heaviest suicide note in history”, and likened it to the stone tablets carried by Moses.

…Government sources pointed out that Downing Street is a Grade One listed building, and the smallest alterations to the exterior require planning permission from Tory-controlled Westminster City Council.

However, if Mr Miliband appealed the decision, it could ultimately be decided by the Secretary of State – likely to be Hilary Benn. “He wouldn’t last very long if he said no,” said a council source.

It would be likely to fall foul of the Ministerial Code, which bans the use of government buildings for the “dissemination of material which is essentially party political”, sources said.

And who is this fuckwit Torsten Henricson-Bell?  How anyone could be more of a total policy fuckwit than Alex Marsh strains credibility, as does the fact that our party leaders employ total policy fuckwits, who would not last 5 minutes in local government, at the highest possible levels, is a mystery.  But that is the tragedy of our time.  Policy is now set by total policy fuckwits.  Torsten is described as ‘terribly bright but totally devoid of any politics’  and described as ‘Gaffe Prone’ , He never tires of telling us how ferociously clever he is,’ says one insider’, in other words a perfect total policy fuckwit – designed to engineer initiatives designed to sink like a stone in the lake of reality.  Of course all of Eds many enemies said nothing when this idea was floated passed the, it gave them a perfect stone to lash to Ed and Torstens careers after the election, especially after Torsten had planted many bad ideas and blamed John Cruddas and others for them – revenge is so sweet.

Where do total policy fuckwits spawn from?  Without real they are former spads, sometimes graduating from dumbtanks who have never had the burden of designing and implementing policy in a proper job.  For the total policy fuckwit policy is an intellectual wheeze designed for temporary polictical leverage at the small minority of floating voters rather than in the public good.  They are the enemies of public services and the chief architects of policy trainwrecks.  They are a growing breed, politics spawns them as being a total policy fuckwit is seen as being teh best way of getting in with senior party figures and swinging a safe seat.  Sadly total policy fuckwits oftem fail to get any seat because they are universally seen as total policy fuckwits.  Prominent total policy fuckwits are Sheridan Westlake (SPAD to Eric Pickles), Torsten Henricson-Bell, Alex Marsh (Downing street Housing ‘expert’ cough cough),  former Gove ideologue Dominic Cummings, Tom Shinnor, former Giove Special advisor disgracefuly appointed to DE director of strategyu despite having almost no experience, and the uber overpaid Clegg Spad (of 21) Ryan Coetzee.   Of course SPAD also stands for ‘signals passed at danger’ and the total policy fuckwit is so enamoured of their superior intelligence they pass them without seeing the signs flashing red.