I doubt the value however of hypothetical questions without sites.  A question on ‘edge of settlement’ will immeadiately alert someone to thinking about their settlement whilst new settlement will be viewed as somewhere else.  Of course new settlements are almost always rated onto smaller existing ones.

Ipsos MORI was commissioned to carry out a survey of adult residents living across the Horsham and Mid Sussex local authority areas. The purpose of the survey for Meeting Place Communications was to help understand local opinion on housing topics as well as preferences for potential future housing developments.

The survey findings include:

People who cannot afford homes in London should be encouraged to get “on the trains and up to Manchester”, a Tory MP has said.

Croydon South MP Richard Ottaway said the solution to the shortage of affordable homes was to boost the northern economies and shift people out of the capital city.

His call was condemned by Labour as “outrageous”. Housing spokesman Emma Reynolds because they said it would involve splitting people from the communities they grew up with.

The clash comes after figures showing London house prices have soared almost 20 per cent in the past year and are leaving millions priced out of the homes market.

Mr Ottaway said in a BBC interview: “There are still plenty of places outside of London where houses are much cheaper, much more affordable.”  He referred to Chancellor George Osborne’s proposal for a “Northern hub” linked by high speed rail and went on: “Houses up there are really quite reasonably priced and that is perhaps where we should be, what we should be doing is getting people on the trains and up to Manchester.”

Asked if that would involve people quitting London, he said: “That would be the long-term result of the Northern hub, we would be moving some of the economic base of London further north to relive the pressure on housing in London and to boost the north.”

Ms Reynolds claimed: “Londoners will be outraged that the Tories’ solution for families who are being priced out of London is to move them away from their communities. The shortage of homes is at its worst in London with the Tory-led Government and Conservative Mayor Boris Johnson building only a third of the homes our capital city needs.”

But Mr Ottaway defended his remarks, saying: “It was not a bugger off, go to live in Manchester statement.

It was a thoughtful response to this economic situation.

“Labour may not have noticed but there is a housing crisis in London. I’m a One Nation Tory and we want to try and shift the emphasis away from just London.”

Our research ﬁndings suggest that the NPPF and the principles upon which it is based have not had the impact on local authority decision making anticipated by the Government. Although signiﬁcantly more applications are approved than refused, Councils continue to reject approximately 20% of all applications.

In contrast, the rate of success at appeal has improved materially, particularly at inquiry. Indeed, the statistics indicate that applicants have a 50% greater prospect of achieving planning permission following a public inquiry than they did pre-NPPF.

The failure of local authorities to formulate and adopt local plans to the timescales envisaged in the NPPF may provide an explanation. Applications are being refused by LPAs in the absence of robust, evidence-based policies. Convincing the Secretary of State that such refusals are justiﬁed is increasingly difﬁcult for LPAs in the face of the NPPF presumption.

The NPPF doesn’t not help you much for domestic extensions.  For housing schemes however it does and these are more likely to go to PI.  A more through statistical analysis is needed top determine if the causal variable is route of appeal or application use.  I often dispair at the quality of statistical analysis in planning consultants reports.

He has been tweeting against these plans which go on consultation starting today.  Intrestingly the barge house at Orleans Park was used by George the second to visit his mistress the Countess of Suffolk, a bonk barge.

This is how Planning resource should write headlines 🙂

Gloriana is the first Royal rowbarge to be built in over 200 years, built as a lasting legacy to mark Her Majesty’s Diamond Jubilee.

Commissioned by Lord Sterling, she was built by a team led by local Master Boat Builder Mark Edwards MBE in 2012. She was the lead craft at the Diamond Jubilee Paegant which saw both Sir Steve Redgrave and Matthew Pinsent CBE take a lead role.

At the naming ceremony, Her Majesty asked that Gloriana be maintained by Lord Sterling and the Maritime Heritage Trust and approved the principle that Gloriana will be used to promote better use of the Thames. This is now being done via a programme of opportunities for Royal-supported, charities and other events that celebrate the Thames – with a particular emphasis on involving young people.

However, it is essential she has a safe and secure home to act as a permanent base, with access to the water to facilitate her charitable and ceremonial functions and to enable members of the public to admire her beauty and learn of the history of the vessel, and in practice to learn about the process and methods of building boats from centuries gone.

Over the past few months, Richmond Council has been working with Lord Sterling to identify a possible solution. Several sites have been reviewed but the combined team believe the site of the historic boat house at Orleans Park to be historically, but also operationally, most suitable.

The world-famous Foster and Partners, one of the most innovative international architectural practices, have prepared a potential design for a modern new boat house in Twickenham’s’ Orleans Park. This design has paid respect to the specific needs of the craft, while allowing the public sight and access to the barge.

Whilst the whole project is subject to funding and planning permission, it is hoped that construction on the new boat house, associated visitors’ centre, enhanced new café and play area will commence in Autumn 2015. As part of the Planning process, residents and users of the Thames will be invited to have their say on the proposals throughout July.

A consultation will be available online on the Richmond Council website from 5pm on Tuesday 1 July until Tuesday 29 July.

Drop in sessions are also being held at Orleans House Gallery:

“This is a once-off opportunity. Other boroughs were keen to secure the privilege of hosting Gloriana. But as the only borough straddling the Thames, with centuries old royal connections I believe Richmond upon Thames is uniquely equipped to be the home of this remarkable piece of British craftsmanship, designed and built by our residents and honouring one of our greatest ever monarchs. I am delighted Richmond and Twickenham have been chosen.

“The proposal is, of course, subject to funding and planning permission; however I hope that residents agree that the new Gloriana boat house in Orleans Park, with its inventive architectural design, together with a brand new play area and state of the art café – will benefit not only those visiting the vessel, but also the hundreds of existing park users and be a further conspicuous step in the revival of Twickenham under this Council. She is surely a vessel of which the whole country can be proud.”

“Since having built Gloriana we’ve had the experience of operating both down river and up river and it seems to us having had many discussions with Lord True and his colleagues that the geographical position of Richmond and its magnificent history and royal connections suggests this is the natural home for her.

“All generations, foreign cultural visitors and perhaps most important our children will have opportunity in the generations to come of enjoying the wonderful timeless history of this area, a gem in these islands.”

These are the horrible plans before Lord Foster sexed them up.  Note the subway. 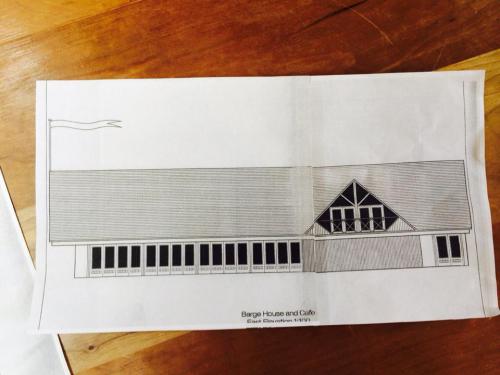 Pesky creatures, eating fis and building dams and all. Will be a very predictable public outcry, JR on lack of public consultation and humiliating climbdown by that idiot Owen Patterson who thinks of the planet as his big farm.

The future looks gloomy for the first wild group of beavers to be spotted in England for around 500 years after the government revealed it intended to trap the dam-building critters.

To the delight of animal lovers, video footage proved the existence of a family of beavers apparently thriving in the River Otter in Devon earlier this year.

But the government announced on Monday that it was planning to capture the animals and find a new home for them in a zoo or wildlifepark.

In a written parliamentary answer, George Eustice, a minister in the department for environment, food and rural affairs, said: “We intend to recapture and rehome the wild beavers in Devon and are currently working out plans for the best way to do so. All decisions will be made with the welfare of the beavers in mind. There are no plans to cull beavers.”

The video footage emerged in February of three European beavers on the River Otter in east Devon.

They could be seen gnawing at the base of trees, grooming themselves and playing together.

Experts said the sighting was highly significant as it strongly suggested a small breeding population of beavers now existed outside captivity.

European beavers were once widespread in the UK but were hunted to extinction by the 16th century in England and Wales for their fur, medicinal value and meat.

A Defra spokesman said: “We intend to recapture and rehome these beavers and are currently working out plans for the best way to do so. All decisions will be made with the welfare of the beavers in mind.

“Depending on the source of the animals, they could be carrying a disease not currently present in the UK. In addition, beavers have not been an established part of our wildlife for the last 500 years. Our landscape and habitats have changed since then and we need to assess the impact they could have.”

But some conservationists expressed anger that the government planned to capture the creatures. Some have even suggested the government has been pressured by anglers concerned the beavers could endanger fish stocks.

Devon wildlife consultant Derek Gow criticised the decision. He has argued that the wild beavers should be studied – and the views of local people taken in account – before a final decision was taken. “They have not listened to us,” he said.

He said rather than harming the environment, the beavers could actually help it by clearing trees and creating habitats for other flora and fauna.

[Adonis]suggests that the boundaries of the current 39 Local Enterprise Partnerships (LEPs) should be redrawn to match local economic identities such as “travel to work areas”, leading to a significant reduction in their number. LEPs were set up by the coalition government in 2010 – replacing the nine regional development agencies – and Adonis was told industry could not stomach another change to the architecture of local business support. The new LEPs will also be given direct say over growth strategies and priorities, backed by a substantial single pot of funding to invest in economic development.