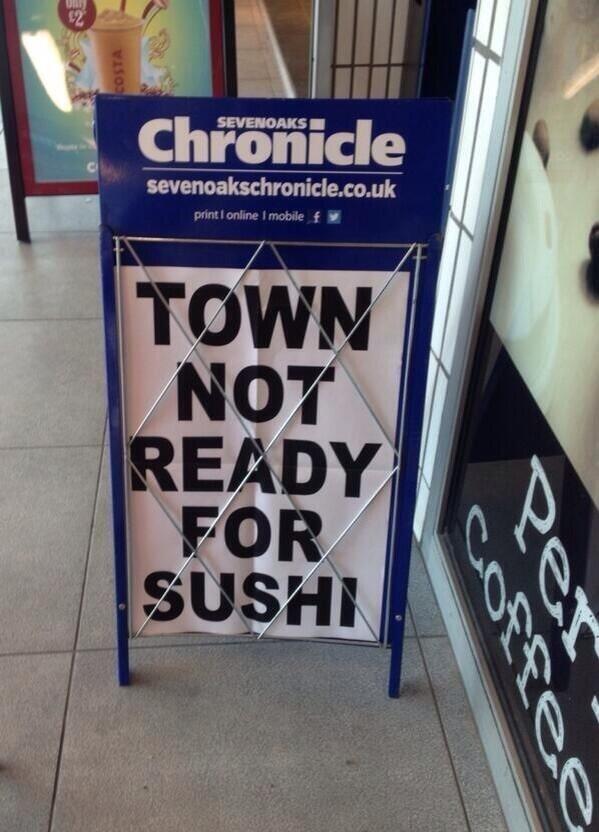 THE businessmen behind Sevenoaks’ first sushi restaurant are ditching raw fish in favour of burgers, steaks, fajitas… and wall-to-wall sports coverage. Seven Sushi in London Road is undergoing a major makeover to become a Tex-Mex sports bar in time for the World Cup. Its owners say they called time on their Japanese menu after just six months of trading because sushi has not proved as popular in Sevenoaks as they had anticipated.

Director Hugo Peyrel said: “Seven was a high-end sushi experience but, with hindsight, it was more a London offering than Sevenoaks. Treat “It’s not everyday dining – it’s a very occasional treat. “Sushi is also expensive when it’s prepared fresh and to a high standard. And it’s not a taste that’s for everyone. “We had a lot of praise for our food and we did have a regular clientele. “But as time went on, we felt we weren’t getting the response we had forecast.” Mr Peyrel, who also runs El Matador across the road, said his company had initially toyed with the idea of launching a Tex-Mex restaurant when it bought the old Lady Boswell’s School building last year. Now, with the sushi trade not panning out as planned, his team is going with its initial instincts.

“Tex-Mex appeals to a much wider clientele,” he said. “El Matador has been established for three years and food at this new restaurant will be a lot closer to the Spanish and South American styles of cooking we excel at. “We’ll be offering Texan favourites like burgers and steaks alongside Mexican dishes with a twist. “We are also creating an American-style sports bar. Sevenoaks is lacking a good sports bar. We’ll have four or five big screens and we’re doing promotions with beer companies like Coors, Miller and Heineken. “We think the sports bar is exactly what Sevenoaks needs, especially this year with the World Cup. That’s why we’re planning to open early next month – just before the warm-ups.” The new restaurant and sports bar will be called Border Tex-Mex and starts trading on June 9.