The irrepressible Colin Wiles has published in his Inside Housing Blog a piece advocating expanding London out to the M25.  This would not be practical and would cause many problems and have few housing advantages in the real world. To demonstrate why ill hypothetically accept Colin’s premise of a Green Belt free world and attempt to show that even if we had no Green Belt now we would have to invent it.

According to the Office for National Statistics the capital’s population is set to grow from eight million now to over ten million by 2032. That means London will need to build at least 800,000 homes over the next two decades to cope with population growth – even more if it is to make good past under- supply. That means up to 40,000 new homes will be required every year for twenty years. Yet London is only building around 18,000 a year at present

Just a technical note here these are projections not forecasts.  When translating a projection to a target you need to reflect whether an area is housing constrained, as areas such as London and in the Green Belt area, or whether it is not – a growth area where it is assumed that housing supply will expand to match increase in-migration from housing constrained areas.  Of course the risk of the post NPPF world is that areas such as Milton Keynes will only propose to meet ‘local growth’ which of course implies more housing in the Green Belt so they balance.  Indeed it is the Prime Minister and not Eric Pickles who understand this from his speech in March, that the Green Belt requires Regional Planning with Garden Cities beyond to make sense

Beyond the London boroughs, but within the M25, there is..75,000 hectares of land, of which about two thirds is Green Belt. .. I am not suggesting that all of this should be built upon, but much of it is either low-grade agricultural land, or occupied by low priority uses such as golf courses and pony paddocks, with little or no aesthetic value and no access for the general public. You only have to drive around the M25 to understand that this land has no other purpose than to hem London within its post-war boundaries and you have to ask yourself, what is the point of preserving this land when London’s needs are so acute?  Even if 50 percent of it was built upon it would provide over a million new homes, easily enough to accommodate London’s needs over the next twenty years. Across the UK, most towns and cities expand to the edge of their surrounding bypasses and ring roads. Why should London be any different?

From my GIS study there is 72,785 Ha of Green Belt between the M25 and the outer edge of London.  Colin is not suggesting building on opens spaces and encapsulated countrywide within London so I have excluded such areas from the analysis.  So space for 1 million homes?

In the following model the hypothetical assumption purely to explore its practicality is to assume no London  Green Belt, or at least a flexible inner edge, but all other national policy in the NPPF remains.

Now clearly all 73k Ha of land would not be suitable.  The purple areas on the map below show the North Downs AONB, Epping Forest SPA etc.  I don’t have data for flood areas (sadly released to all local authorities by the EA but not to researchers & neither ‘productised’ or released as open data). , but that would rule out most of the western edge along the Colne Valley and the Thames, as well as along river Mole, Roding etc.

You would not want to develop large housing areas peripheral of London dependent on the car and harming the national function of the M25.  It would very quickly clog up with local traffic if that were the case and harm the national economy.  This is why the NPPF is not like a local bypass.  No-one wants an American style edge city, not even the Policy Exchange in their dumbest dumbtank moments have argued for that.   So in line with the principles of the NPPF I set three constraints, sites within 800m of a station (10 mins walk), outside 2km of a motorway junction and outside nationally protection landscapes and biodiversity areas, historic parks and gardens etc. protected by the NPPF.

If we look at the detail at these areas, red on the map, we find some inside Heathrow Airport, some in the middle of the Thames or built alongside and across the M11.  Also many of these sites would be bad planning , filling in the entire gap between Epsom and Banstead for example, it is quite typical for a strategic planning exercise for about 1/4 of sites to be found ultimately suitable when looked at in detail, any significant areas needs watercourses with spare discharge capacity for sewage works for example which we know from most river and streams running into the Thames have no capacity free whatsoever.   Remember we need to  exclude flood risk areas.  Lets be generous to Colin and say 1/3rd would be suitable.  This leaves 724 Ha available smaller than 7 sq km.

Or developed at the 30 DPH that Colin would favour that results in  errr 21,720 dwellings about 2% of what Colin suggests is possible.  Developed at Bedzed like 50DPH is 36,200  and at a denser historic town like density of 100DPH would be only 72,400 dwellings.  So even then we have only 7% of need met and developed no more housing  in total than somewhere between the sizes of Brentwood &York.

It is clear then that even in a Green Belt free world over 90% of the overspill requirements of London would either have to be developed within London through developing at higher densities or beyond the M25 in Garden Cities or urban extensions.  A small % of these ‘red’ sites might still be suitable in our current Green Belt world.  I note one has already been released in the recently adopted Thurrock Core Strategy and other are having to be considered in the light of the NPPF requiring need to be met locally or through your neighbours volunteering to take your share (any volunteers?).

So even under the most generous assumptions building London outwards is not the big solution to meeting London’s needs.  Indeed this was released by London Transport after the war, when they calculated that if they extended the Northern Line to Elstree as planned the Northern Line trains would be full before they reached Inner London depriving Inner Londoners of the tube.  It is the same on most rail and tube lines running out of London and even where there is some spare capacity, such as the improved Central Line there is a dogfight of which of the ultra high density schemes planned in Inner London will use all of it up.  So unless you spend 10s of £Billions building an entirely new underground network expanding London to any significant extent is simply a non starter (you would need to dig a new Thames as well for the sewerage outfall).   So actually a Green Belt makes a lot of sense in deflating expectations on what is realistic and forcing development inwards, and outside the Green Belt and outside areas Green Belt areas where sprawl would simply clog up roads.

Sorry Colin but ask a planner to run some numbers next time you have a brainwave (that goes for the Policy Exchange, Centre Forum and IEA too). 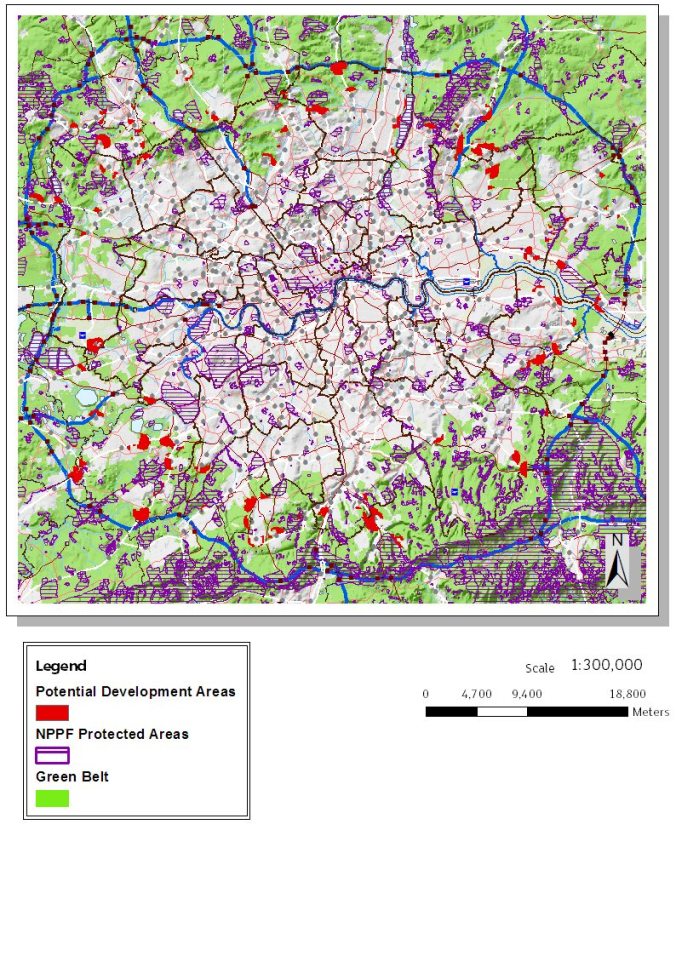