David Cameron in the FT

Too often projects get hobbled by planning restrictions, funding blockages or regulatory burdens. So this autumn the government is on an all-out mission to unblock the system and get projects under way. Today we give the green light to two power plants in the north of England – at Ferrybridge and Thorpe Marsh – which together will create more than 1,000 construction jobs. And we welcome another significant infrastructure project, with BT’s announcement that it will complete its roll-out of superfast broadband by the end of 2014 – meaning the recruitment of more than 500 engineers. Over this autumn you can expect to hear many more such announcements.

Err neither of those two projects require planning permission.  They have had applications under the Electricity Act – so any delay lies with ministers.  In any event larger schemes now rest with the infrastructure planning commission  under the 2008 planning act.  A fast track system the government has decided to slow down not speed up by adding a final stage process of ministerial approval.  So stop attacking the planning system Cameron, when jobs lie locked in your own ministers filing cabinets.

We have continued to keep our proposed alternative draft version of the NPPF draft dealing with concerns raised by many bodies concerning heritage,  biodiversity and transport  issues, as well as cross cutting issues raised by the main environmental, transport, planning and property bodies.

We have now gone through all of the main groups finishing with the National Trust and the CPRE. 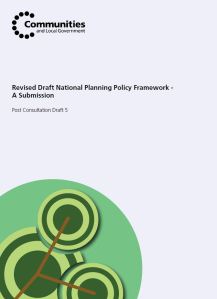 The aim has not been a lowest common denominator approach or worse a big tent approach accepting every change.  Rather it has been looking for common ground and accepting reasonable amendments that clarify issues and neither add unacceptably to length or divert the thrust of a more proactive document.

The alternative draft can be found here

Inevitably there were some suggested changes where they would have created legal problems or where they may have got the wrong end of the stick – these are set out.

What we hope this means is that it should be possible to ‘fix’ the key issues by broad consensus, neither groups denies the need for housing and economic development, it is a question of how and where; leaving only the most difficult issues, concerning the ‘presumption’ and the duty to cooperate, for discussion.

The next steps is to present this to these groups next week and then discuss with other parties.

Just to summarise this draft responds to the concerns raised by all o9f the following groups:

Council for Protection of Rural England

Friends of the Earth

(Reuters) – Fourteen years after Beijing’s planned satellite city of Tongzhou rose from a small town with many scattered fields, it still lacks decent schools, hospitals and entertainment complexes that residents need to make it feel like home.

Few of the people for whom Tongzhou was built — residents in overcrowded downtown Beijing — live there.

Instead, thousands of young, middle-class and blue-collar migrants from poorer parts of China have moved in, contending with the lack of amenities and the daily jam of cars on the highway into Beijing, which now has a population nearly that of Australia’s.

Far from being an easy fix to housing Beijing’s soaring population, Tongzhou and other satellite hubs in the capital have created new headaches for planners.

“Everyone who has moved here from inner Beijing regrets it,” said a 52-year-old man surnamed Wang who has lived in the Tongzhou area all his life.

“People don’t have faith in the education and medical services here, nor does the area have enough businesses,” he said. “They can’t develop real careers in Tongzhou, so eight out of 10 still work downtown.”

Wang’s complaints underscore the plight of Beijing city planners and counterparts around the country, where China’s breakneck urbanisation leads a world set to reach 7 billion people by the end of the month, according to United Nations estimates, and 9 billion by 2050.

Beijing is among the world’s most populous cities, though population rankings vary widely. It has swelled by about 10 million people in the past decade, a trend mirrored worldwide, particularly in developing nations.

Cities in Africa, Asia and South America are bursting at the seams from migrants seeking better jobs or as farmers flee droughts, floods and other environmental disasters.

In 1950, about 730 million people lived in cities. By 2009, it was nearly 3.5 billion and in four decades it will be 6.3 billion, the United Nations’ Department of Economic and Social Affairs said in a March 2010 report.

By 2025, there will be 29 megacities globally with 10 million or more people, the report says, from 21 two years ago, with the majority in developing countries.

Yang Weimin, a vice minister of the Office of the Central Leading Group on Finance and Economic Affairs, said that the tens of millions of China’s rural migrants boosting urban population could have “negative consequences for development”.

“The big cities face big pressures, while the smaller and medium-sized cities lack enough industry to provide sufficient employment,” Yang, who has played a prominent role in China’s urbanisation policies, said at a Tsinghua University forum in Beijing on Saturday.

“So, everyone goes to cities like Beijing, Shanghai and Guangzhou, and that creates problems,” he said, the influx adding to disparities in public services, education, healthcare and housing conditions.

That explosive growth over-stretches limited resources and infrastructure and places megacities on a collision course with a predicted increase in extreme flooding, storms and rising sea levels from climate change, U.N. Habitat says.

By 2070, almost all cities in a top-10 list of exposure to flooding risk will be in poorer countries, particularly China, India and Thailand.

Even in China, with its wealth and vast infrastructure spending, some city administrations are struggling to keep pace.

This year marks the first time half of China’s 1.34 billion population are classified as urban, pointing to the daunting tasks ahead for policymakers as they try to meet demand for services by an increasing wave of migrants.

More than 100 million rural Chinese residents will settle in towns and cities in the next decade, according to a recent government report.

Satellite cities such as Tongzhou were designed to relieve population pressure on Beijing. The government declared in 1991 it would build 14 such hubs on the capital’s outskirts.

By 2020, the government expects the satellite cities to house 5.7 million of Beijing’s current 19.6 million residents, according to Beijing Municipal Planning Commission.

“Although the intention was to create new and independent economic and cultural centers, most of the satellite towns remain economically dependent on Beijing, and have only become dormitory towns,” Jeffrey Johnson, who specialises in Chinese megacities at New York’s Columbia University, said in emailed comments.

In Tongzhou, clusters of drab high-rise apartments, many half-empty, dot the town 33 kilometres (20 miles) from Beijing’s city centre. Styled after faux European villas, some of the apartments’ facades have Roman columns and names like “New Village”.

“I came here because I could only afford the housing prices in this part of Beijing,” said Ma Teng, 29, who moved from central Anhui province. “When I bought my apartment in 2007, the area around was desolate. There is no entertainment, you can’t even go to a movie here.”

Johnson said satellite cities need to be developed far enough away from the urban core to encourage independence and discourage commuting. For now, that isn’t happening.

On a weekday morning at Beijing’s Tiantongyuanbei subway station, an outlying hub about 21 km north of the city centre, thousands of commuters are crammed nose-to-neck.

“Yeah, it’s annoying, it’s crowded. But it’s also our best option,” Zhang Yu, a 30-year-old make-up sales associate said, before plunging into the press of bodies. Her two-hour commute began with a 15-minute wait just to get to the station door.

Population growth in China’s megacities outpaces growth in the country’s more moderately sized cities, according to a 2011 report on China’s cities published by the Chinese Academy of Sciences. China has between three and seven megacities, depending on different calculations, with several on the cusp.

To ease population pressures, the Beijing government said it plans to move thousands of residents out of the city centre, has shut down schools for migrant workers’ children and ordered low-rent housing in underground shelters to be cleared out.

Nationally, the government is encouraging the growth of cities inland as well.

To accommodate the onrush of new city dwellers across the country, China will have to pave 5 billion square metres of road, construct 5 million buildings, including 50,000 skyscrapers, and add up to 170 mass transit systems, a report by consultants McKinsey & Co says. All by 2025, it added, when China would have 221 cities with one million or more people.

Jakarta, Indonesia’s capital, is overcrowded with about 10 million people and growing quickly. The city is prone to flooding and rising sea levels, is sinking in parts because of excess ground water extraction, is chronically congested and is in an earthquake zone. The government has raised the idea of moving out.

But building a new city means good planning is vital.

Officials in Beijing said in mid-October the government plans to pump 10 billion yuan over five years into Tongzhou to connect it by highway to the international airport, and build a university campus and a children’s hospital, making it a “magnetic pole” for development.

“Any kind of plan for decentralising the population requires a series of policies that work together,” said Wang Jianguo, a senior project officer on urbanisation at the Asian Development Bank’s Beijing office. “If you only have a population policy without an employment policy, without an industry development policy, education, medical policy, it won’t work.”