But what really matters are the individual room size standards rather than the gross standards.

There has been a dramric downturn in London, down by 31.5%. The SE is flatlining. Sw and WM slightly up

YouGov survey. 2011 study: All figures, unless otherwise stated, are from YouGov Plc. Total sample size was 2,086 adults. Fieldwork was undertaken between 25th – 27th May 2011. The survey was carried out online. The figures have been weighted and are representative of all UK adults (aged 18+).
Respondents were asked if they agreed with the statement: I am opposed to new house building in my area. 11% of respondents overall agreed, while 21% of people living in the South West agreed with the statement.

But the high level of opposition is striking. Previous County by County surveys have shown that Cornwall has been the most pre-development county, but even there with the recent County County decision to build less than need sentiment may be shifting.

What are the reasons for this? The South West has less Green Belt than any other region, the lowest population densities, the least urbanised, the most space to build. Therin lies the issue. Beautiful yes, the proportion of AONB and National Parks above the national average, yes, but no more so parts of the North of England that are much less anti-development.

But being the most rural region people move there and get second homes, pushing house prices up, and those having moved or bought second homes what to preserve that value. As by definition you build extra houses to keep house prices down. Is the South West now the new spiritual home of the Nimby?

Alex King is an outstanding designer with a great philosophy, architect as social entrepreneur, seeking out problem sites and designing commercial developments that also fix a local problem.

But like all of us we must regret sometimes placing some images on our websites and in our portfolios.

Did like me you grew up with those Britains Sheep? 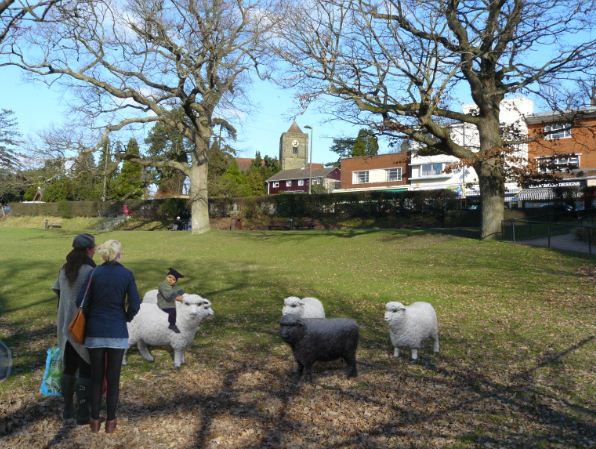 See SexyALevels has copied the meme we looked at earlier in the week.

The above was from Badminton school Bristol published by the Guardian!!!, this school is one of the most imfamaous comely 6th form image pimpers – shame on you Guardian.

Ministers yesterday (17 August) confirmed that only one enterprise zone bid from the North West had been successful – at Daresbury Science & Innovation Campus in Cheshire.
The decision meant that the bid to create a zone around BAE Systems’ sites at Samlesbury and Warton, submitted by the Lancashire Local Enterprise Partnership (LEP), and Cumbria LEPs’ submission for a ‘low carbon’ zone at Barrow Waterfront in Furness and Lillyhall in west Cumbria, had been unsuccessful.
Edwin Booth, the chairman of the Lancashire LEP, admitted the failure was a disappointment, but said the county had received “some very positive feedback” from government about the quality of the bid.

Davis Brock at the Plan-It Law blog stated that the presumption dated from 1923. I asked him for a source. Thanking him for his reply

Michael Harrison Q.C. who later became Mr Justice Harrison is my source. He wrote in the JPL in 1992 that there was a 1923 Government Circular stating that “the presumption should always be in favour of the person seeking consent to interim development, and obstacles should not be placed in the way of such development, except in the case where it is clearly detrimental to local interests and needs“.

I referred to that in my JPL article in the January 2011 issue. There has been a consistent line of circulars since 1923.

Martin Goodhall has also referred in the past to its common law origins.

From the context it must have been a circular on the Chamberlain Housing Act of 1923 which introduced Interim Development Orders.

The difference of course between then and now is that ‘local interests and needs’ apply apply against the presumption where you have an up to date plan. Of course we have sustainable thrown into the mix, but only on one side of the equation as a device for saying yes but not as a device for saying no. There is no policy in para. 14 of the NPPF to say no to unsustainable development.

Arsonists have set fire to 26 cars in two days according to Bloomberg.  Mainly Daimler, BMW and Audis.

“The arsonists want to hit what they say are ‘Fat Cats,’” Berlin police spokesman Michael Gassen said. A special unit is investigating the fires as political crimes after the police received letters claiming responsibility that derided globalization, gentrification and rising rents, he said….

A key factor for the unrest is that about 40 percent of German youths are either without a high school degree or a paying job, according to Johannes Becker, head of the Center for Conflict Studies at the University of Marburg.

“In Britain you have the phenomenon that people are predisposed to jumping on the bandwagon,” Becker said. “They see that something is up and want to be part of it, to add some fuel to the fire, as it were. With these cars in Berlin, they are in contrast consciously trying to send a message.”

The attacks in the past happened mainly in eastern Berlin districts where more affluent tenants had pushed out squatters who arrived there after reunification in 1990. It’s a “new trend” that arsonists have now moved west, targeting areas such as Westend and its upscale neighbor Charlottenburg, said Michael Maass, a Berlin police spokesman.